Although our fame is quite modest and our fans are few, word of the cinépoetry work that Michelle and I have been doing has spread all the way across the sea.
To Cambridge, England.

We recently received an invitation from The Cinepoetry Society at Cambridge (who knew such a lovely thing existed!?) to submit a cinépoem for screening at a film event they’re hosting next spring.

Their event will consist entirely of cinépoetry, which is remarkable in and of itself. The Society has specifically requested (and we’ve obliged) a copy of Abattoir for their screening.

So, coming to Cambridge in March of 2008: heavy metal, blood spatter, and poetry!

If you visit The Cinepoetry Society’s online Screening Room, you can see several diverse examples of the genre, including interesting animated works from Billy Collins, a text-only version from Filipino poet Nick Carbo, and a fun piece from Kino, the “poet of sound and image”, to name just a few. Our own Alice & Abattoir are there, too.

I think this is what I love best about the internet… finding new art and inspiration that otherwise would exist only across some far away sea.

-Lo, who wants to hitch a ride to the Cambridge show. 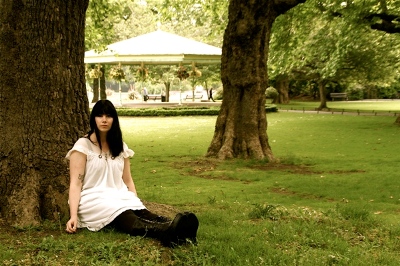 You’ll be happy to know that you can now (or later) gather ’round the computer after consuming large quantities of holiday bird and sink into a peaceful, even catatonic state while you watch the newest cinépoem.

Unless, you know, you’re one of those freaks who actually likes watching football. But if you are, chances are you’re not reading this website. If you love football and read this website, well, you must be ambidextrous, too, you crazy fool.

Back to the point of the post: new cinépoetry.

Après un Rêve (After a Dream) is the 18th cinépoem to arrive on our scene. It was inspired by a couple of things… the poem itself was written shortly after I found out my sister was pregnant. The title is borrowed from a musical piece of the same name by composer Gabriel Fauré.

The Fauré piece is also the musical score for this cinépoem, and adds a great deal of melancholy ambience, helping to create the dreamlike state we were shooting for.

The look and feel cinépoem itself was inspired by a recent trip to Ireland. Boy and I decided to shoot a photographic cinépoem abroad, as we’ve done before in Paris and in Venice. This time, instead of letting the cinépoem loose throughout an entire city, we stayed within the lush green confines of St. Stephen’s Green, in Dublin’s fair city (where girls are so pretty).

We shot the series within an hour’s time, early one fine Friday morning. I’m sure the Dubliners thought we were very strange tourists, but they were polite enough not to mention it.

I’ve only recently discovered the other words to Après un Rêve (the musical version). Here is the translation based on a French text written by Romaine Bussine (1830-1899), which is apparently based on an Italian poem by an unknown Tuscan artist:

In a slumber which held your image spellbound
I dreamt of happiness, passionate mirage,
Your eyes were softer, your voice pure and sonorous,
You shone like a sky lit up by the dawn;

You called me and I left the earth

To run away with you towards the light,
The skies opened their clouds for us,
Unknown splendours, divine flashes glimpsed,

Alas! Alas! sad awakening from dreams
I call you, O night, give me back your lies,

They’re all beautiful, I think. The cinepoem, the music, the anonymous Italian. I love them all.

-Lo, who dreamt last night of spaceships and sparrows.

I’m letting the ink sink in.

Fresh from the gun, my newest tattoo is all crisp lines and delicate shades, standing out in bold relief until it heals and peels.

My 13th tattoo is an art noveau interpretation (drawn by the lovely Sarah and fine-tuned by the talented Rocio) of the Atropa belladonna plant, also known as deadly nightshade. It’s one of the most toxic plants in the western hemisphere. Children have been poisoned by eating as few as three of the shiny purple berries.

If you’re a Burton fan, you’ll recognize it as the plant that Sally uses in The Nightmare Before Christmas to poison Doctor Finklestein and make her escape.

But the plant’s poisonous nature is not really the reason I’m going to wear it on my arm forever.

“Belladonna” is Italian for “beautiful woman”. Drop the first three letters and you have my name — which means “the woman” in Italian.

I got the first part of this tattoo — a single belladonna flower and leaf — when I visited Italy for the first time in 2005. Boy and I got (non-matching) tattoos in a little shop near the Vatican. The tattoo artist’s name was Materazzi Maurizio. He had papered the walls of his small shop with posters of homoerotic Roman centurions, and he spoke only two or three words of English, which was about as many as I spoke in Italian.

We managed to get our tattoos without mishap, and the belladonna flower on my right arm has been a favorite ever since.

But in recent months it’s started to look lonely to me, and I thought that letting more belladonna twine up my arm would be a great way to celebrate my birthday.

To me, the belladonna tattoo signifies a time of coming into my own, of settling into my skin and embracing the woman that I’ve become, thorns and all. I like the duality of the beautiful woman/deadly nightshade nature of the word. There does always seem to be a bit of poison in the beauty.

Bella donna. She’s who I’m learning to be.

-Lo, who isn’t afraid of the needle.

Wicker Kid is writing again. I couldn’t be more delighted. Go read his latest, and you’ll be delighted too.

The Swell Season is in town, and Boy and I and a bunch of our friends are going to go see Glen and Marketa in person tonight. I’m tingling with anticipation. I expect it to be beautiful. After Once, how could it not!?

This weekend, in addition to being a birthday weekend for yours truly, is also Poppy Jasper Film Festival weekend down in Morgan Hill, CA.

Slippery Shiny Feathery Things, the same cinepoem collection that won the Best of Festival Arts award at Berkeley, is screening at Poppy Jasper on November 10 at 9pm and November 11 at 3pm.

Check the schedule if you’re in the area and want to stop by the festival for some big screen action.

That’s all for now, but it’s quite enough to keep you busy, yes?

I’m going to be an aunt soon.

My sister is gorgeously, beautifully pregnant with an ever-growing bump that we’ve been calling “Peanut”.

He’s a first for the Witmer clan. First grandchild for my parents, first baby for my sister, and the first time I’ve ever been so close to a pregnancy.

Friends have popped out wee progenies here and there over the years, and I’ve been there at baby showers and first birthdays. But I’ve never been so involved before.

Last weekend I attended a birthing class with my sister, and was quickly overwhelmed by just how much I do not know about this whole process.

You’d think, being in possession of a womb myself, that I would be a little better informed. But I’m also a member of the Unused Uterus Club at work (where myself and my fellow Unused Uterians are surrounded by women who’ve already gone where we few, thus far, fear to tread.)

I think my mother was afraid I’d be either terrified or grossed out by the class (and the incredibly crisp, unedited videos) and make my Unused Uterus Club Membership permanent.

But just the opposite happened. My dad attributes my stoic stomach to growing up on a farm and watching hundreds of newborn creatures — puppies, kittens, lambs, goats, etc. — make their somewhat slimy but no less miraculous way into the world. I’m sure that’s part of it.

But the avalanche of new information was ultimately what won me over… learning about the four stages of labor and the way the body readies itself for what is to come. I had no idea, and now I’m utterly fascinated.

I’ve always thought of pregnancy as nine months of waiting for the torture of childbirth. Yes, a miraculous new life is growing inside of you, but at some point it’s going to need to come out, and the coming out part is going to hurt.

But the pain is just part of the process, I think. And I know I’m saying this from a safe and painless vantage point — unused uterus and all. But after the birthing class and talking to my sister and thinking about the millions of women who’ve already been there, well. I think the actual act of parenting is much more daunting than the few hours of birthing.

I’ll get the inside story in a few months from my sister herself, as she crosses over to a place I’ve never been.

All our lives, I’ve gone first. First to drive, to date, to drink. First to get a bicycle, and then a horse. First to break curfew, first to leave home. And now, finally, she gets to take the lead.

I know she’ll be amazing. 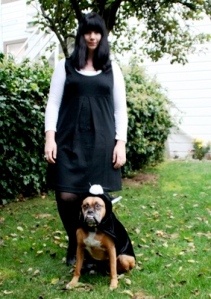 Last year I wore two costumes, one for day, one for night. (I tend to overcompensate for a costume-less childhood: Growing up on a farm meant minimal trick-or-treating.)

This year, I put just the barest minimum of effort into my transformation.

At first, I wasn’t even going to bother. But then I looked around and thought, “What’s out there that already looks like me?”

One look in the mirror at my never-ending bangs and I had the answer: Emily the Strange. Just add a dress and some Mary Janes and presto sort-of-chango: Costume.

Emily is always surrounded by her cat posse, though (Miles, Sabbath, NeeChee and Mystery), so I recruited LeeLoo to the cause with a black cat costume for dogs. She’ll tolerate it, as long as the costume-wearing is quickly followed by the ingestion of cheese.

So, contrary to my early ambivalence, I woke up yesterday morning all bouncy and full of Halloween cheer. Cheer that was slowly siphoned away by the absolutely gloomy and incredibly apathetic day.

What’s up, San Francisco? We can’t get dressed up anymore just because the Man put the kibosh on the Castro Halloween tradition? Now we all have to go to work as everyday overworked employees? We can’t mix up the humdrum with a little dress-up fun? We think we’re too old to be spooktacular?

My friend K (who was Ugly Betty for the day) and I shared a morose lunch, looking out the window at all the far-too-normal passersby. For the entire hour we sat at the Utah eating our BLTs, not one costume walked by. Even on a normal day in San Francisco, you usually get more than that!

And then the ultimate deflation: Nobody at work even noticed that I was in costume. Joke’s on me, I guess… that was my original ironic intent, but it totally backfired. Either that, or nobody at my workplace pays any attention to fictional counterculture characters that start off all badass and underground and then end up turning into an overexposed Hot Topic sellout.

Or maybe I was just possessed by the true spirit of Emily: “Wish you weren’t here!”

Whatever it is, it’s time to move on. I’m ready for you now, November. Bring on the birthday…

-Lo, who prefers treats unless the tricks are done by ponies.