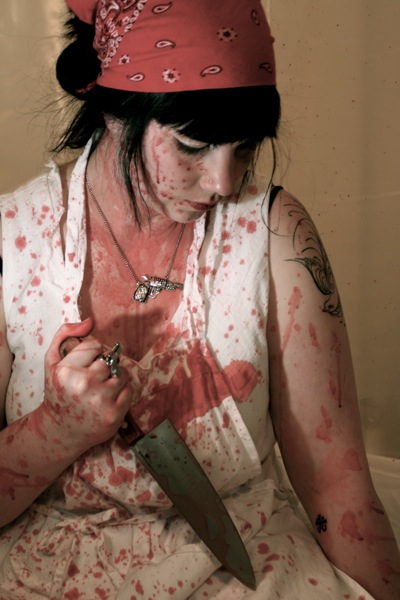 Eminem has a new music video out. It’s called “Space Bound” and the violence depicted in the vid is, rather unsurprisingly, pissing a lot of sensitive folk off.

I’m not a huge hip hop fan. My musical taste leans more in the Trent and Tori direction, but I do have a thing for Eminem. He’s witty, he’s provocative, he’s talented and, come on, don’t deny that you secretly loved him just a little bit in 8 Mile.

But I’m here to talk about the violence. Specifically, artistic violence. Yes, there is such a thing.

From a creative perspective, violence is really fun to create. The fake blood recipes. The prosthetic wounds. The squelchy sound effects.

When we shot our bloodiest cinepoem to date, Abbatoir, everyone on set had the giggles in the middle of conversations about the best looking blood splatter.

And, with the exception of “auteurs” such as Michael Bay (who just likes to make things go BOOM while sweaty hot chicks sprint past in slow motion), many times the violence is used as a metaphor.

But there seems to be this whole subset of metaphor-proof people who always seem to get their undies in a bunch about something. Because, you know, Columbine was Marilyn Manson’s fault. And KISS really stands for “Knights in Satan’s Service.” And watching the new Eminem video might make you kill yourself.

Back when I used to attend church, I’d get people coming up to me after a poetry reading, concerned for my mental state. Or my spiritual state. Or some kind of state that was none of their business, since 99.993 percent of them didn’t actually know me in real life.

The thing they didn’t get was that poetry isn’t a diary. You take liberties with the words, with the situations. You exaggerate. You get dramatic. That’s what being creative is all about.

And sometimes when life feels bleak, you take it out in your work. You get dark. Raw. Violent.

Catharsis can be really beautiful.

So let Eminem blow his brains out in a music video. At least he’s not doing it in real life. And only a complete ignoramus would assume that he’s actually advocating a gun-to-chin philosophy.

-Lo, who eats lots of red meat, although there are plenty of YouTubers who think “Abattoir” is advocating veganism.