Conversation stammers to a halt
the second the suitcases
get tucked into the trunk.

On the sidewalk we are astonishingly awkward
shuffling feet, stuffing hands into any available pocket.

Accidental eyelock would unleash emotions
too delicate for this public curbside. Instead
we lunge into an embrace like two bull moose
locking antlers in battle.

Inevitably one of us hangs on too long
stunned stupid by the sudden realization
of just how much has been left unsaid.

But as the taxi engine revs, goodbye
is the only word left, and its absolute lack
hangs in the air like exhaust.

-Lo, who, for the first time in a year, has written a poem that is not about a baby or a dog. 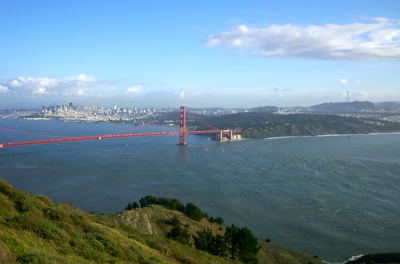 I’ve been thinking alot lately about why I work.

My maternity leave from August to December last year was the first time since I was 15 that I’ve had so much consecutive time to myself.

Granted, that time to myself was largely spent changing diapers and pushing a pram through the park. But still, it was week after week of 40 hours NOT spent locked down at a desk.

And the thing that amazed me the most about it was that I never once got bored.

Ok, yes, there was the whole new mother thing happening. But putting the baby metaphorically aside for the moment, the point is that I had no trouble filling my days. Each morning was a gift of “What are we going to do today?”

The aforementioned walks in the park became a big deal, something I always looked forward to. And there were poems to write and cinépoems to edit and a yard to putter around in and if there had been a dog on the premises, there would have been even more to do.

But then my time was up and here I am again, surrendering 40 precious hours to the machine.

I can’t tell you how many times since December 8th I’ve sat in meetings listening to marketing muckety-mucks arguing about what headline I should write to get people to buy a bunch of crap they don’t really need. And all I’m thinking is, “I could be pushing a pram through a park right now.”

So I’ve been thinking a lot lately about why I work.

And the answer lies on the tip of a western peninsula, within the seven by seven miles that I call home… San Francisco, where the majority of residents are renters because buying a home is too expensive.

When Bruce and I pulled up stakes in Illinois ten years ago, we knew the move was permanent. There has never been any looking back, not even in 2001 when I got laid off six times in a row. (In any recession, it seems the copywriter is always the first to go.)

More than any other place on earth I’ve been, San Francisco is home.

Before Lucette arrived, I didn’t mind working. I have always tried to find the most creative word-wrangling job I can to finance the life I love to live.

But now that our family is one person larger, I have begun to begrudge those workaday hours. And so I have to remind myself why I do it.

Because I don’t have to work.

We could always move somewhere cheaper. Perhaps a nice cul-de-sac in a beige suburb where everyone drives the .05 miles to the neighborhood Wal-Mart.

But the dream was never to hie westward and settle in San Mateo. Or Oakland, Alameda, Fresno or Dinuba.

The dream is San Francisco. And it’s a dream I want to give to my daughter.

I want her to grow up here, in this beautiful city, surrounded by people of all races, creeds, languages and sexual orientations. I want her to wake up to the salt air of the ocean, to sleep to the sound of the foghorns.

I want her to have the Golden Gate in her backyard and the mountains within reach. I want her to own the wealth of used bookstores and know the wonder of world-class ballet.

I want her to eat more food from Farmer’s Markets than McDonald’s. I want her to wear out her walking shoes. I want sand on her toes and sun in her hair.

I want what all parents want — to give their child the world. The difference is that in San Francisco, I can actually give it to her. Because the world lies just outside our front door.

And that is why I work. For Lucette. For San Francisco. For the dream.

You are smiling when I leave you
and smiling still when I return
but how many smiles do I miss in between?

Locked down in endless afternoon meetings
I doodle your face in the margins of creative briefs.
The countdown to five is slower than ever.

On the way home I gamble on freedom, SuperLotto style.

-Lo, dreaming of being jobless and solvent.