For the second year in a row, my cinepoem partner Michelle Brown and I have been invited to the Berkeley Video & Film Festival.

As one of the 2007 official festival selections, our cinepoem entry, titled Slippery Shiny Feathery Things, is being screened next Friday night, October 5th.

If you want to attend the festival, it runs October 5-7 at the Landmark California Theatre at 2113 Kittredge Street in downtown Berkeley. You’ll find the screening schedule here and can get tickets in advance from the East Bay Media Center or during the festival at the theatre box office.

Michelle and I are also extremely proud to announce that we have a shiny new accolade to add to our modest collection: The 2007 Grand Festival Award for Arts. We’ll be giving awkward, hasty speeches and collecting our award at the film fest next weekend.

The only place you can see Slippery Shiny Feathery Things is at a film festival. (It will be screening in November at the Poppy Jasper Film Festival, as well.) Once we complete our next big (BIG) project, however, you’ll be able to see all of our cinepoems, including all film festival entries, on DVD. But I wouldn’t hold your breath because that’s going to take awhile!

Until then, come on out to the theatre or eat some popcorn while you watch cinepoems online. It’s almost the same…

-Lo, who confesses a ferret-like affection for shiny objects.

I have this thing about airports.

More accurately: I have a thing about taking people I love to the airport, leaving them there, and driving away.

You could call it a superstition, I guess. Categorize it with black cats and indoor umbrellas. I just call it a “thing”.

It goes like this:
Every time I have to drop someone off at the airport, send them back to where they came from or off on a trip without me, I worry that they won’t come back. That this time, this brief moment here at the curb, this rush of last minute reminders and double-checking of luggage, this is it. This is the last time we’ll see each other.

There’s never really time for panicky endearments. And really, at that moment, I like to keep my irrational fear to myself. So goodbyes are often perfunctory.

People do this every day. The quick drop off. The hurried goodbyes. And really, my fear is not all that irrational, because sometimes, for the tragic few, it is the last goodbye.

In the sprawl of O’Hare Airport, there’s a small parking lot with a little green sign that says “Kiss & Fly”. It’s the end of the airport train line, where you can conveniently drop off or pick up your traveler far from the congested bustle of the terminal.

I’ve always thought it was a good name, and it fits perfectly with my newest cinepoem. She’s not nearly as fanciful and melodramatic as the last cinepoem was. She’s an everyday sort of girl, just going about her business.

But! She does have something very special… a guest appearance by Boy. It’s the first time in 17 cinepoems he’s ever appeared in front of the camera. Took a lot of sweet talking to get him there, so do pay attention!

The YouTube version is over here, for you non-quicktime folks.

-Lo, who never whistles while she works.

Overheard at the Buffy the Vampire Slayer sing-along:

“It’s too bad Angel isn’t in this episode. He’s so hot.”
-teenage girl behind me in line, standing with her clearly unenthused mom

“I have a friend who has a friend who went to high school with Faith and — no surprise — she said she’s a dumb bitch.”
– know-it-all twenty-something nerdcore girl standing in front of me with the guy who brought his dry cleaning to wave around during the Mustard song

“So, like, the Grrr Arrrgh monster at the end, sometimes he changes.
Like when Buffy had to kill Angel, he cried. And when she graduated from high school, he wore a little graduation cap. And, like, in the Christmas episode, he wore a Santa hat… I mean, I didn’t, like, see them all myself, but that’s what I heard.”
– Marina beeyotch with muffin tops

“In my opinion, Anya totally out-Cordelia-ed Cordelia.”
– big balding geek of a man sitting behind me with a big buttery tub o’ popcorn

This weekend, I wholeheartedly embraced my inner geek. The one who worships at the throne of all things Whedonesque and has a whole collection of Buffy action figures and comic books (hooray for Season 8), and owns every single DVD, from “Welcome to the Hellmouth” to “Chosen”.

For those not in the Buffy-know, there was a sing-along this week at the Bridge Theatre, put on by the Uncool Kids and attended by legions of my fellow fanboys and girls.

If that’s not going back far enough for you, then you need to be informed that there was a musical episode called “Once More, With Feeling” (originally aired in Season 6 on November 6, 2001). There was singing, dancing, and spontaneous combustion, and fun was had by all.

And although I fully enjoyed singing my little strange heart out to such favorites as “I’ll Never Tell” and “Walk Through the Fire”, it is a bit disconcerting to see, live and in person, all the freaks who share your geekhood. Especially the drunk Marina trixies who have “like, totally seen all the DVDs and, like, love them” but never watched the show when it was actually on TV.

It was entertaining, to say the least. And big friend points to M & K, who sat through the whole thing without ever complaining. (Although I think M and I are now even for that My Chemical Romance concert I sat through earlier this year!)

-Lo, who lets her freak flag fly on Sundays and bank holidays.

Don’t look a gift horse in the mouth, they say.

And although I like to pretend I don’t listen to them, cliches usually become cliched because they contain a dollop of truth.

Which is why, a few months ago when this dude from Vermont contacted me and said, “Hey, I run a small indie press and I’d like to publish a chapbook with you,” well, I thought about it for two seconds and said “Hell, yes.”

And so I present to you my third book, She is a Death Star
(21 poems about her).

It’s a true chapbook, meaning that it’s small and waif-like and folded and stapled and low-tech. And it’s available in very limited quantities. And I’m not selling it on this site.

You can get this sweet little thing at only two places. Maybe three…

1. Scintillating Publications
Send your $6 to:
Joseph Veronneau
21 Russell Street
Burlington VT 05401
or email him at mustiis@aol.com

3. Any poetry reading I am featuring at.
Time and venue info will be posted here well before the reading.

Two of those poems were first published in Shedding the Angel Skin, eight are in The Secrets of Falling, which leaves 11 shiny new ones that you can only find in She is a Death Star. A pretty sweet deal for a surprise chapbook, don’t you think?

-Lo, who once got a gift horse named Fantasia. 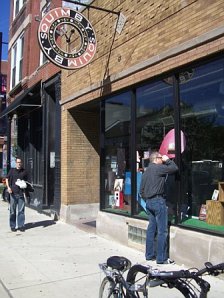 A quick update on bookstores that carry The Secrets of Falling because now there are a few more on the list:

If you stop by one of these stores and can’t find Secrets on the shelves, that means they sold out, so please request a copy so they’ll order a few more.

As always, you can get Secrets online if you don’t see a bookstore listed near you.

And don’t forget, tonight is the opening night for the Old Enough to Buy Art Show, where 3 pieces from The Secrets of Falling are on display and up for sale. Be sure to stop by the Melting Point Gallery in San Francisco to see some great mixed media pieces by local artists. The show runs through next Wednesday, September 26.

-Lo, who has been talking like a pirate all day long. Arrrrrrrr!

I apologize to all my readers who don’t live in San Francisco.

For example:
I and the lovely Miz Kathy, the artist genius behind The Secrets of Falling, are in an art show which opens next week.

Three of our pieces will be featured, and they’re actually spreads from the poetry book: Crash Protocol, Epic, and Like a Duck in Thunder.

The show is called Old Enough to Buy Art 3, and it features a lot of great mixed media from local artists. The show opens next Wednesday, September 19 at the Melting Point Gallery and runs through September 26. The address and hours are listed here.

So support your local artists, get some fun new pieces for your collection, and benefit the National Parkinson Foundation, all in one fell swoop.

And as if that wasn’t exciting enough all by itself, I’ve got more swanky local happenings coming up in the next couple of months, including cinepoems at two film festivals.

Speaking of cinepoems, Michelle and I are finishing up our latest, titled Kiss & Fly, which will be online in the next week or two. So that’s something to be happy about, even if you don’t live near Fog City.

While we’re on the topic of happy things, all of you must MUST go see a little movie called Once. I don’t care if you have to drive 100 miles through hail and sleet to get to a theater that shows it… I swear to the almighty powers that be, you will love it.

It’s easily the most amazing movie I’ve seen in a very long time.

Doesn’t hurt that it was filmed in Dublin, and Boy and I were there just a couple of months ago. It was like seeing old friends to recognize Grafton Street, Temple Bar, and St. Stephen’s Green — which, coincidentally, is where the next cinepoem-in-waiting was shot. That one is called Apres un Reve, and we haven’t started editing it yet, so I shouldn’t tease you too much.

…So much goodness in store for you! You watch. You wait. You’ll see.

-Lo, who thinks that, last night at the VMAs, video killed the video star.

A big thank-you goes out to the fine bunch of folk who showed up at Sacred Grounds for the reading last night. (Kathy took this stealth photo of the reading in action.)

A special shout out to my open mic buddy Gary, who deserves the credit for getting me to Sacred Grounds in the first place.

I met a lot of lovely people, sold quite a few books, and had a great deal of fun reading my stuff. Which is all as it should be, I think.

I’ll be reading again in the next few months at Red Hill Books in Bernal and Bird & Beckett in Glen Park. I’ll post details for everybody when the dates get closer.

Meanwhile, I have some laundry and poems to finish, a dress to alter, a wedding to dance at and a dog to walk.

I’ll be seeing you soon with more things to say about a new cinepoem, an upcoming film festival, and how to upstage the bride without being too obvious about it.

Until then, Internet, sleep well and don’t forget to floss.

-Lo, who only flosses because her dentist is really good at laying down the guilt.