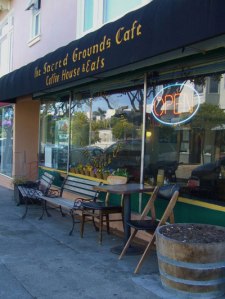 All my fellow San Franciscans (and Bay Area people, too) can consider themselves cordially invited to the poetry reading at the Sacred Grounds Cafe next Wednesday, September 5th.

The mic opens to all who come with poetry in hand at 7:30. I’m the featured reader on the 5th, so I’ll be taking the floor between 8 and 8:30. I’ll be reading from the new book, the old book, and perhaps a few hot and fresh lines, as well.

It’s a small space with good food, so get there early, get yourself some eats, and pay your respects to the open mic crowd.

-Lo, who will not be playing, singing, reciting, or involved in any way with Free Bird.

They say what goes around comes around, and sometimes it’s true. Though not as often as you’d hope.

But sometimes, sometimes it all works out.

Lately, the goings and comings around here have been a surprisingly pleasant resurgence of people from the past.

Most of it started on myspace, which is not, as the talking heads would have you believe, just a “teen website”. There are a whole heckuvalot of us non-teens on there, mostly because we’ve discovered that if you do enough clicking around, you’ll run into some long-time-no-see faces.

Sometimes during the expected lifetime milestones (like high school graduation), you look around at all those familiar faces and think to yourself, “Weird. I may never see these people again.” In my case, that thought was quickly followed by a “Thank God!”

But many times the milestone rolls by unnoticed and you transition from this thing to the next without taking notice of the names and faces that will soon be forgotten or, at the very least, grow a bit musty there in the back corner of your mind.

Then years later, when a name resurfaces unexpectedly in your myspace inbox, the recognition kicks in, with a whole host of unbidden memories of the time when that person was just another fixture in your daily routine.

One of the familiar faces that has recently reappeared in my virtual world belongs to AP, a girl I knew just in passing for about 4 years or so in my mid-twenties.

And here’s where the part about girls being (catty, competitive, backstabby) girls comes in…

AP and I could never honestly have called ourselves friends back when. True, we shared mutual friends and often collided at parties, but usually we shook it off and kept on walking. Much of it was my fault.

You see, one of the people I chose to let my little light revolve around during that time was Queen of the Misfit Social Club, and fought tooth and sparkly silver nail to keep her crown. She never wanted anyone to shine brighter or longer than she did.

As her unspoken understudy, it was my job not only to keep my own wattage on the dim side, but also to fend off the advances (real and imagined) of other “unworthy” luminaries.

So I’m afraid that AP got the brush-off, more than once. I didn’t give it much thought at the time. There was so much else going on and, let’s be honest, most of us don’t have the brain-space to think about anyone but our own sorry selves in our twenties, during that mad rush to figure out who we are, with accompanying whys and wherefores.

Fortunately, AP and I have gotten another chance to collide here on the far side of 29. It’s going much better this time around.

We’ve exchanged a very long and ever-growing string of emails, getting reacquainted and reconfiguring our perceptions of each other. And for the first time, we’re actually building a friendship.

I said to her recently, “I don’t think you and I would have ever had this conversation in our 20s. But here we are now, and it’s a lovely thing.”

So here’s to girls being kind to each other, to girls being unthreatened by another’s brightness. To girls just being (supportive, understanding, tag-tucking-in) girls. Woman power and all that.

-Lo, who relinquishes her misanthropy on a case-by-case basis.

A few days of writing exercises will do wonders for your word bank.

I’ve just returned from a writing conference and my notebook (and my poor squishy brain) are brimming with half-finished but promising starts and a fine numbered list of new ideas. (One of which is a poem about LeeLoo and her crispy tongue.)

I was surprised to find that I was one of the youngest writing conference attendees (except for a ragtag band of local high school overachievers). I confess I thought I’d be mingling with a few less bluehairs and a few more writers of my own age bracket.

But GenX was nowhere to be found. And the retired folks were very nice. So it wasn’t a big deal. Just kind of weird.

My instructors were both new to me — Albert Garcia (whose latest book, Skunk Talk, is reviewed here) and Maya Khosla.

Although both of their books are published by Bear Star Press, I found both their teaching styles and their poetry to be quite different from each other.

Maya is a biologist who has lived all over the world, and her writing very much reflects her work (as in my favorite poem of hers, “Lake Trout in a Gill Net” — you can find it in her book Keel Bone).

Albert is a university administrator (and former professor), whose beautiful, spare writing details his love of ordinary things, places, moments, people. (I really love his poem “August Morning,” which is reprinted in this review).

I collected a lot of great ideas and encouragment from both poets, and if I follow through on all the writing threads I started at this conference (which I intend to), my pen and I will stay very busy for the rest of the year, at least.

And now for the re-entry into the neverending rush of everyday living… back to work, to business, to jury duty (insert annoyed face), to reality.

-Lo, who wonders when her own hair will turn blue.

Soon and very soon, I’m off to a conference for poets and writers.

I’m not sure what to expect. Writers often tend to be quite competitive, myself included. You always want to be the best in the room. Trouble is, “The Best” is so very subjective.

I tend to think that poets like Nicole Blackman are far better than your average stuffed poet laureate. But that’s me.

I went to a poetry reading the other night and watched a woman in green bob her head emphatically up and down like some sort of epileptic chicken at nearly everything the featured reader said. Clearly, she thought his overwrought, pedantic, self-important stanzas were the cat’s meow.

I, on the other hand, thought he was in rather desperate need of an editor. And an enema. (Rawr!)

So you see, different strokes…

Perhaps I’ll meet fellow writers who are lovely and kind, fellow poets who turn fine phrases without rancor. (I know they exist — I met one named Gary just the other night.)

But really, I’ll just be happy to exercise my own writing muscles, to learn new things about words and craft and self. There’s always room to learn and grow. No matter who you think you are.

And as added impetus for the wordy weekend ahead, a friend sent me this poem in an email titled, “Why I love and worship Auden.” It’s an amazing piece of work, not only for its beauty but also for its resounding truth…

Musee des Beaux Arts
by W.H. Auden
(1940)
About suffering they were never wrong,
the Old Masters; how well, they understood
its human position; how it takes place
while someone else is eating or opening a window or just walking dully along;
How, when the aged are reverently, passionately waiting
for the miraculous birth, there always must be
children who did not specially want it to happen, skating
on a pond at the edge of the wood:
They never forgot
that even the dreadful martyrdom must run its course
anyhow in a corner, some untidy spot
where the dogs go on with their doggy life and the torturer’s horse
scratches its innocent behind on a tree.
In Breughel’s Icarus, for instance: how everything turns away
quite leisurely from the disaster; the ploughman may
have heard the splash, the forsaken cry,
but for him it was not an important failure; the sun shone
as it had to on the white legs disappearing into the green
water; and the expensive delicate ship that must have seen
something amazing, a boy falling out of the sky,
had somewhere to get to and sailed calmly on.

-Lo, once more into the breach.

Mood: Well Done
Drinking: The Tea with the Ice

The fearless Miss Kathy and I hit the pavement today to hawk our wares. All in all, I’d say the hawking went quite well.

Here are a few bookstores that now stock The Secrets of Falling on their shelves:

In San Francisco…
•City Lights (the one & only)
on Columbus in North Beach
•Bird & Beckett Books and Records
on Diamond St. in Glen Park
•Phoenix Books
on 24th Street in Noe Valley
•Dog Eared Books
on Valencia in the Mission
•Green Apple Books
on Clement in the Richmond

In Santa Cruz…
•Logos Book and Records on Pacific Ave.

In Chicago…
•Quimby’s in Wicker Park

In Belfast…
(the one in Northern Ireland)
•No Alibis on Botanic Ave.
•Bookfinders on University Road

More bookstores will be added to the list soon, and of course, you can always get Secrets online.

But we love our local, independent bookstores (and salons!) and we hope you’ll show them a lot of love, too.

If you stop by one of these stores and can’t find Secrets on the shelves, that means they sold out (yay!), so please request a copy so they’ll give us a call and order a few more.

-Lo, who just wants a small space on your shelf.