One week ago as Donald Trump took the oath of office, I boarded a plane for DC with my six-year-old daughter, Lucette.

In the days after November 8th when the first rumors of a Women’s March on Washington began to surface, I told my husband Bruce, “I’m going. And I want to take Lu with me.”

I’ve had a lot of time to think about why. Not so much why I myself would want to go, to put on a pink pussy hat, to march with sign held high down the streets of our capitol—I knew I needed to do something drastic, to get up off the couch, out of my safe San Francisco bubble and make my voice heard. But why, as my Dad asked me a few weeks ago, why would I “put a child in that sort of situation.”

Because, I said. Because she is a Little Citizen. Because she will one day be a woman, and the things that are happening in our country today will directly impact her life. Because I want her to know that her mom stood up, not only for her, but all women and girls—of all colors, creeds and concerns. Because someday I want her to be able to say, “I was there, too.” Because I want her to know that she can say No. That it is very American to resist. That protest is patriotic, too. That this is what democracy looks like. That she has power. That her voice matters, and so she should stand up and shout.

She’s only six, but she gets it—she gets the heart of why we were there. She spent hours crafting her very own march sign that on one side said, “It is not OK to be mean” and on the other, “I can teach you to be a better person, and you can be a kind person.”

“Will Donald Trump be there, Mom?” she asked me, “will he see my sign? Because I wrote it so he knows that he can be a kind person. He should be a kind person. It’s dumb to be mean to me just because I’m a girl.”

The metro to L’Enfant Plaza was incredibly crowded—Lu’s Auntie Kathy handed her an iphone playing My Little Pony to distract her from the absolute crush that was honestly starting to freak her out.

But when we hit the streets, when people straightened their pussy ears and lifted their poster board signs and began to chant, “Love trumps hate! Love trumps hate!” I watched Lu’s eyes get wide with wonder. “Mom,” she whispered, “there are so many people here! Are they all here to march with us?”

And when I told her “Yes, we are all marching together today,” and I saw the white dome of Capitol Hill just blocks away, surrounded by a sea of pink hats, I started crying. Not sad tears, I had to explain to her—proud tears. I was so fiercely proud to be there.

For most of the day, our “march” was more like a shuffle. But I have never been crushed in a crowd of kinder, more polite people. There was no pushing. There was no arguing. Other women helped me lift Lucette up to my shoulders so she could see (and breathe). Other moms gave me the wink and nod as they shouldered their own kids.

I honestly don’t know how much of that day Lu will remember. It was inspiring and empowering, yes, but it was also emotionally draining and difficult—and I’m just speaking for myself as an adult! Hanging around in a crowd of half a million people wasn’t all fun and games for a 6-year-old either (although I did find her a tree to climb and an ice cream cone with rainbow sprinkles).

I think she’ll remember the hats, and the signs, especially the ones that she thought were hilarious. I think she’ll remember that there were more people there than she’s ever seen in her life, and they were all laughing and smiling and helping each other. She’ll probably remember the pink hair spray she asked me to color her pigtails with. But I hope somewhere, the knowledge that she can make a difference remains and sinks down into her very bones.

The day after the march was pretty special, as we spent it visiting monuments and memorials—Lincoln and FDR and Korea and Vietnam, where I had to explain the concept of war. 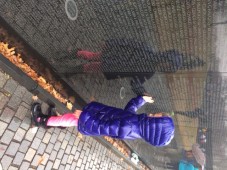 Her favorite was the Martin Luther King Jr. Memorial—she had just finished learning about him at school and I overheard her telling her Aunties, “Did you know that Martin Luther King changed the world? People thought that if you had brown skin you weren’t as important as if you had light skin? Isn’t that stupid? But then Martin Luther King told people, ‘No, we’re all the same inside.’ Just like how if you have two eggs and one is white and one is brown, it doesn’t matter because inside the yolk is still yellow in both of them and you can’t even tell them apart!”

One of the hardest things about being a parent, to me, is the ever-present and awesome responsibility to do right by this small human being. To love them unconditionally, yes, but also to equip them with the knowledge and confidence and fortitude they will need to be a good citizen of the world.

Our world today is not the one I want for my daughter. But going to the March, I think, was a way of showing her that hope is greater than fear, and that she herself is brave and strong and powerful. And she is not alone. 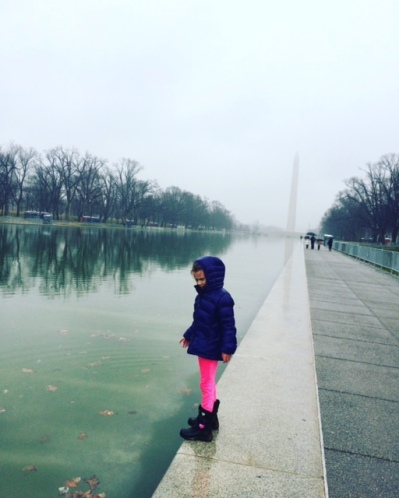