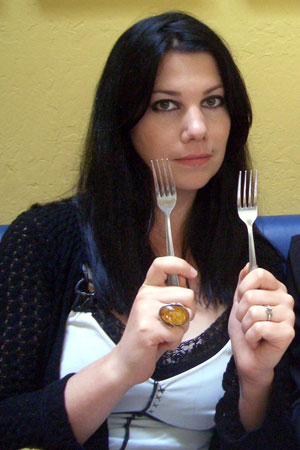 I’ve been thinking a lot lately about the whole wife thing. What it means to call yourself a wife. What it means to be one. Not so much because I’m fresh off an anniversary celebration, because I don’t really think of myself as Boy’s “wife.”

Let me shove my foot in my mouth a bit further in an effort to explain…I don’t think Boy and I have a typical all-American marriage. I mean, we’re not out there on the swingers limb or anything truly avant-garde, but I don’t wait at home crocheting doilies and watching the Bold and the Beautiful while he brings home the bacon.

And maybe it’s because I’m surrounded on all sides by San Francisco (yay!), but I don’t think of myself as “wife” so much as “partner.” I fear I’m making nothing but nonsense, so I’ll leave the word obsession and move on to my pet peeve of the post…

There’s a blog I’ve been reading lately which I really should probably run far away from, because it makes me all cranky and violent, but it’s like crack — conservative christian crazy crack — and I just keep going back for a fresh fix.

The woman who writes this blog is only a few years younger than me, but she lives on a faraway planet in a galaxy that’s light years from this one. Like myself, she grew up going to a conservative christian (baptist) school, but that’s all we have in common. I had fairly liberal, open-minded parents. Her parents were baptists to the core. (Her dad was a pastor. I knew him. He was a big bully.) I graduated and left that school far behind, opting instead for a state university and passport to the real world. She did the good baptist girl thing and went from baptist school to baptist college to baptist camp to baptist husband. She’s so scared of the real world, she can only peek at it through fingers and then run off and repent and bemoan the state of her “deceitful heart” all over the internet.

(Side pet peeve: Isn’t that what diaries are for? Spilling your most intimate secrets to a book with paper pages? A book nobody else gets to read? You know, the ones with the lock and key?)

She’s been writing lately about how she met her husband, and in addition to it being one of the most boring love stories of modern times, it has elements that are so weird, they are freaking my sister and I out. More than once, one of us will read the latest post and then call the other to say, “Can you believe it’s 2007 and people actually think this way?”

An example: This woman writes about her graduation from college and says, “Since I wasn’t dating anyone my senior year, I had NO IDEA what I was going to do after I graduated.” (screaming caps are hers)

I had to read that a few times over to make sure that was really what she said. I had forgotten that people in that world, the fundamentalist baptist world, actually think like that. The girls go to college for the express purpose of finding a husband. Their mothers and grandmothers and all the ladies back at the church pray every day that little Curlieque will find her mate, a good-God-fearing-christian-boy, preferably a preacher or missionary, somewhere in Bible-Believing Baptist Collegeland (the coveted MRS degree). And then she can finally fulfill her purpose for being on this earth by being a good wife, a “helpmeet” for the all-important male.

Not that there’s anything wrong with meeting your man in college and getting married, but most people go to college for a career, or at the very least, an education. How is it possible that a woman in this country can still measure her success by her marriagiability and then lose her shit before graduation because, even though she has a degree, she isn’t married, or *gasp* isn’t even dating! What — you can’t go out and get a job? You have to wait to have a husband to tell you what to do? But I digress…

The rest of her story goes on to describe her meeting her future husband while working at a christian camp and how they used to hang out at WalMart with a chaperone and how he wouldn’t talk to her until she finished her camp-prescribed Bible-memorization project and how he asked her parents’ permission to date her and told her that if her parents said no, he would never speak to her again.

It all just seems so quaint and so completely insane.

Especially when you consider that she had to be at least 21 when all of this stuff was happening. I mean, this is a girl who counts swear words in movies (The Guardian has 15), making special note of those that “take the Lord’s name in vain.” This is a woman, a nearly-30-year-old woman, who gets excited when her husband gives her 20 bucks to buy stamps for her craft projects, even though she has a full-time job (and paycheck) of her own.

I know I don’t know the whole story (although her blog seems to take care in recording every single last detail), and I know I just got back from a weekend of telling everybody who would listen to stop judging and just love each other. So — pot, kettle, and all that.

But really, it’s 2007! If your idea of a hot date is a stroll through the soulless aisles of WalMart, past the polyester sweatshop merchandise, wearing your best denim knee-length skirt, keeping at least six inches between you and your husband-to-be while a watchful chaperone dogs your every step, well, I’m sorry, but you’re a little off your nut!

I certainly don’t think everyone has to live their lives the way I would live. I have lots of friends who are all over the map with their relationships, their marriages, their lifestyles, and I’m all for lots of variety and people figuring out what works for them and what makes them happy. But come on — it’s got to be unhealthy to live a life of such repression and fear, to second guess every thought that’s not quite pure, to do things only when your husband gives you leave because “he is the spiritual head of the household”, and to beat yourself up for your imperfections by saying things like, “I’m trying to be a good wife, but it’s hard when I’m so selfish and lazy!”

The only explanation I can give for my addiction to reading this woman’s blog is that it’s like watching a Discovery channel special about an exotic tribe in a remote jungle who run about totally naked save for the gigantic clay plates stuck into their lower lips. It’s completely fascinating and utterly mystifying. I mean, I know the super-fundamentalist baptist church I went to when I was a kid still exists, and I even know who some of its current members are. But since I have removed myself so far from that world, and since I have proven myself to be such a black sheep to them that none of them would ever befriend me (unless they were trying to save me), this girl’s blog is a window inside these people’s world.

No wonder our country is in the state it’s in when there are people out there who still think the 1940s were the best of times.

So yes, this post is completely judgmental and very likely hypocritical and features a photo of forks for no good reason, but that’s what’s on my mind today, so that’s what you get. Enjoy!

-Lo, whose favorite Tori lyric used to be, “I wanna smash the faces of those beautiful boys, those Christian boys…”