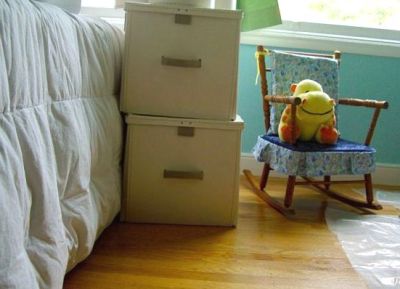 On average, I’m not doing too well with all the old wive’s tales about pregnancy. I’m not garnishing my ice cream with pickles, I’m not excessively bitchy or weepy, and I haven’t yet noticed my fingernails growing at an alarmingly fast rate.

But this nesting thing? Yeah, I’ve got that hardcore.

Even when I’m exhausted, it’s hard to sit still. I’m constantly ticking off a mental list of things I need to get done. Last weekend I painted the nursery, with the help of a couple of friends. It’s now resplendent in shades of aquamarine. (I’m going for an ocean theme, since we do live just steps from the beach.)

Boy and I sat together in the soon-to-be-nursery on Sunday afternoon and plotted out where everything is going to go. Chiffarobe over here, crib over there, bookshelf on the wall up there. My nesting instinct has forced Boy into overdrive, too.

Our house was a two bedroom, and the second bedroom was an office. But baby and camera gear don’t make the best bedfellows, so Boy got busy carving out a niche in the garage for his new office. He’s very handy like that, and his new space turns out to have even more storage than the old one.

The weekend after we returned from our adventures abroad, Boy and two of his burly pals (yes, Mike & Chris, you’re burly) moved all the office paraphernalia downstairs. And now I have this wide open space that’s going to quickly fill up with a crib, board books and a large family of stuffed animals.

I find myself sitting at work making lists of things that I’d rather be doing at home. Safe to say that my brain is entirely elsewhere. But in my defense, having a tiny person kicking your navel out is a bit distracting.

I guess I hadn’t counted on that. When I first found out I was pregnant, I thought I would continue to be a well-balanced person, with lots of other things occupying my brain. I thought my blog posts wouldn’t center wholly around what was happening inside my belly. But I was wrong.

Becoming the carrier of a whole new person, it changes you in ways you can’t predict. I mean, I’m still me. But I’m also a mother now, as hard as that sometimes is for me to believe. And the larger my stomach grows, the smaller my focus gets.

I just want to shut out the world, everyone but me and Boy and Bean (and LeeLoo, too), and hunker down inside our little house to feather a fabulous nest.

But I can’t shut out the world completely, not yet. I have three more months of paychecks to earn, an epic cinepoem to finish (one more shoot and then we start editing!), and people who need my attention.

So I’ll make every attempt not to go into complete seclusion yet.

But if I sometimes get a far away look in my eye, you would be safe to assume that I’m trying to figure out how many mermaid bookends are just overkill in an ocean-themed nursery.

-Lo, who has only purchased one set of mermaid bookends… so far.