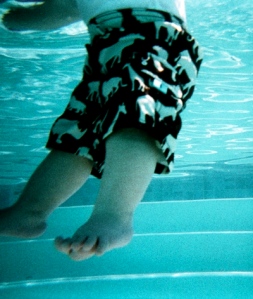 I’m planning to be nibbling on those in a couple of days. Perhaps even underwater, since it is still 93 degrees up northern Cal way, and there is a pool not too far from my sister’s house.

I always used to think it was weird when people would describe babies as delicious, as if they wanted to slather them in marmalade and feast.

But now I understand. My wee nephew is the possessor of many juicy appendages, and I have already been guilty of trying to gobble him up on more than one occasion.

I’ll have to remember not to mention that to him when he’s older and more easily embarrassed.

I wanted to backhand her.

You know when people ask you what your superpower would be? Most people choose super-strength or flight or invisibility.

I am not always great with words in their instantaneous, spoken form. On paper I get to push and prod them around until they line up in the little shapes I like, but when put spot on in any given situation, I can’t for the life of me find the words I most want.

In high school I was tormented by the constant lack of a clever retort, which would have come in handy with all the social awkwardness. Even now, with all these years of practice, I come up with a great response 2 or 3 days later.

I would like to add some measure of invicibility to my super-word superpower, though. So after I tell the shrieking diaper lady, “That’s nice, but don’t expect me to ever change yours!” I won’t be worried that she might pinch me.

Or, in more common situations, when some dude yells something from a passing vehicle, I can make my smart-ass comment back and then go all Buffy on his ass when he turns his truck around.

Wow. Look how far we’ve come from underwater baby toes. I have no idea how that happened. Or why. Or what the point of this post is, really. Except that I’m roadtripping for nephew time this weekend, and I’m excited.

It’s been an odd sort of week and I’m all out of sorts, so if you’ve made it this far in this post, you deserve some sort of medal. Or a snickers bar. Your choice.

-Lo, wandering off in search of baby bits.