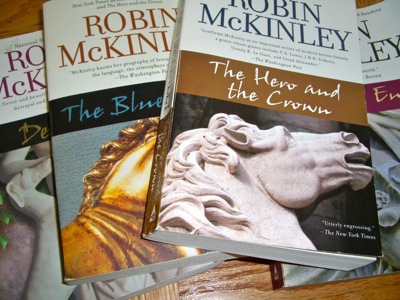 Books have always been a huge part of my life. I grew up without a TV, and my mom would take my sister and I to the Dixon Public Library once a week. We’d fill an apple box with books, take them home, and by the time we returned the next week, we had read all the books (some of them twice).

I had an early affinity for fantasy. I devoured fairy tales (the Grimm versions, not Disney), Greek myths, Indian folk tales starring Ganesh and Kali, Lewis’ Narnia, Tolkien’s Middle Earth, Baum’s Land of Oz, George MacDonald’s stories of the Princess and Curdie and the goblins who lived just beneath a layer of earth, like moles.

With all these visions of mayhem and magic and brave, bold girls like Lucy Pevensie, I have no idea how I missed out on Robin McKinley. But I did.

I only discovered her by accident a few months ago, thanks to a vampire tale (her only book featuring vampires) called Sunshine.

I was intrigued by her writing style, her fully-realized alter-world, and her strong, stubborn female heroine. So I started poking around the web for a sequel or prequel to Sunshine, which doesn’t exist. I found instead the rest of McKinley’s ouevre, most notably The Hero and the Crown and The Blue Sword.

I read Hero while still pregnant, and finished Sword while in the hospital after delivering Lucette. And I decided then and there that McKinley’s books would have a prominent place on Lucette’s already packed bookshelf. They will be required reading.

Enough of these namby pamby Disney damsels in distress, whose only hope is a handsome, vapid prince to come along and kiss them, so they can live out their lives in pampered, dull luxury behind the walls of glistening stone turrets.

If Lucette wants to be a princess, I want her to model herself after Aerin in The Hero and the Crown, who gentles a wounded war horse, goes off dragon hunting, and saves her entire country from doom. I want her to favor Rosie in Spindle’s End, who hates the curly golden ringlets bestowed on her by fairy godmothers…

“When she was old enough to hold minimal conversations, the itsy-bitsy-cutesy-coo sort of grown-ups would pull the soft ringlets gently and tell her what a pretty little girl she was. She would stare at this sort of grown-up and say, ‘I am not pretty. I am intelligent. And brave.’ ”

So far this month, I’ve worked my way through four more of McKinley’s books, and I have the last few that I haven’t yet read on order. I’m going to be dreadfully sad when I read the last page of the last novel, though.

McKinley feels like a once-in-a-lifetime discovery, and I pity the poor author whose book is the first to follow my McKinley binge. They will suffer horribly by comparison.

-Lo, who will always find time to read, newborn infant or no.