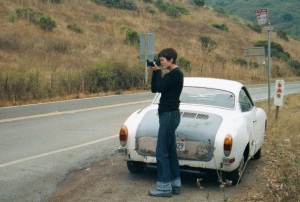 When I found out, at age 4, that my mom was going to magically pop out a brand new little sister, I begged my parents to name her Tracy.

Much to my disappointment, they knew better than to take the advice of a punk-ass toddler, and named her Johanna instead.

One of my earliest memories is of my baby sister laying on the floor in her white cloth diapers with the big yellow safety pins while I played drums on her naked round belly.

Four years doesn’t seem like a huge age difference now, but when we were kids, it meant that we lived worlds apart. She was getting into stuff (paper dolls, bicycles, sandboxes) when I was outgrowing them.

She always wanted to tag along, and I always wanted to leave her behind. I don’t even know how many times my friend Jason (who was only 2 years younger than I) and I would hop on our two-wheeled bikes and pedal furiously down the lane, while she climbed onto her orange tricycle and tried to keep up, yelling “Guys! Wait for me.”

Even as a tiny thing, she was always an old soul, always worried about everybody else, always standing at the window waiting for mom to arrive home safely, always bossing me around when I least expected it.

But when it came to make-believe, I was the boss. During every stuffed animal army invasion, her teddy bears were always on the losing side. When we played dress up in mom’s clothes, I got to wear the green bikini top stuffed with Kleenex, not Jo. I took our Star Wars reenactments quite seriously. I was always Princess Leia, of course, and the Otto boys were always Luke and Han, and Jo was shorter than all of us (not wookie-sized) so that meant she had to be R2D2. And she wasn’t allowed to talk while in character – she had to beep, just like R2 did.

When I was 12, my horse-owning dream came true, in the form of a donkey named Jackie, which I purchased from a distant cousin for $25. After he bucked me off and broke my arm, my dad decided that both of us girls needed to take riding lessons. When I first walked into the stable at Copper Bit Ranch and saw all those glorious 16-hand horses, I knew that I was going to be a star. I was going to be riding a sleek black steed over 3-foot fences in no time.

Yeah. It didn’t actually work out quite like that.

Since I was the only one in the family with a horse-type-creature (come on, a donkey is decidedly NOT a horse), my sister got to ride one of the stable ponies – an adorable little brown mare named Ginger. I, on the other hand, I had to ride Jackie. The donkey. With the stiff western saddle my dad picked up at a farm sale.

So while Johanna trotted prettily around the arena, touching the dressage letters on the wall with ease and grace, Jackie and I lumbered along, veering wildly to the right or the left as I tried in vain to make a donkey actually do what he was told. The riding lessons usually ended up with my sister trotting merrily past me, all the onlookers “awww-ing”, while Jackie leaned his full weight against my left leg and smashed me into the wall. It was highly amusing to everyone but me.

Johanna and I didn’t really become friends until I was in college and she was in high school. It happened when she drove up to visit me one weekend. I don’t remember the details of what we did. I’m sure we rented videos and ate beer nuggets (a college-town delicacy). But all I know for sure is that when I watched her little red truck pull away that Sunday afternoon, I realized that I had made a friend.

That was just the first of many sister weekends. They’ve become a special tradition for both of us, although now we usually show up at each other’s door with a dog in tow (and sometimes a husband).

Today is my sister’s birthday. And it’s a big one this year. Not so much in numbers, because she’s still younger than me (and I’m not old!). But it’s a big one because more than ever this year, I realize what kind of woman I have for a sister.

She’s gorgeous, of course, although she’d never admit it. (And she’s probably blushing furiously right now, reading this.) She’s one of the few people who can get me to laugh, even on the worst of days. She’s much nicer than I am. She is a fiercely loyal friend and an incredibly gifted teacher. She kicks my ass in an argument, hands down. She plays the piano beautifully with those long and slender fingers, and has this whole crafty thing going on that’s really quite impressive. She’s all the things you want in a best friend – she’s smart and funny and witty and warm. She can come up with some astonishing insults, too. In fact, we’ve taken to answering each other’s phone calls with insults. I think the latest one is “What do you want, you bitch-faced whore?!” Every time I see her name flash on my incoming call list, I start smiling before I even answer the phone.

She’s one of the bravest people I know. Right after she got engaged, her fiancé was notified that he was getting shipped out to Iraq. They had a wedding all planned, and she had a gorgeous white dress waiting in my closet, but it was all going to be two months too late. So I got a phone call on a Tuesday morning, “J and I are getting married tomorrow. Can you be here?”

There were 10 people at her wedding – the only ones who could make it on such short notice. Not even my parents could be there, so Boy walked her down the aisle. And she spent the first 18 months of her married life alone, in a new apartment, in a new city, with her new husband on the other side of the earth, staring down death in the desert every day. It was hard for her. I saw it. But she didn’t complain. She had her bad days, yes, but she was braver than I ever could have been. She sucked it up and stuck it out and I have never been more proud.

So today, Jo, on your birthday, here’s what I wish for you:
A kind mirror. Pancakes. A birthday kiss from J. A high-five from McKinna. Sun and falling stars. Lists of baby names. Dreams so close, you can touch them. A sudden onset of inspiration. New sheet music. A pedicure. Traffic-free highways. Girlfriend phone calls. A tall glass of wine. An optimistic sky. Fuzzy slippers. A good book. The all-pervading calm that comes with knowing you are loved, you are wanted, you are appreciated, and you are exactly where you’re supposed to be.

-Lo, who could always use more sister days.

There’s a girl out there named Jessica, who turns 16 today.

And the whole, complete, and entire point of this post is just to say:
HAPPY BIRTHDAY, JESS!

-Lo, who believes that, on your birthday, tutus and tiaras are not uncalled for.

I don’t think I’ll ever be able to outgrow birthdays. I blame it on my Dad. When I was growing up, he was always the first to get excited about his own birthday, even singing “Happy Birthday to Me” weeks before the big day.

I think it’s genetic. I do the same thing. When I called my Mom last week the day before my birthday and sang the birthday song to myself, I could hear her eyes rolling. “You’re as bad as your father,” she said.

But I can’t help it. There’s just something magical about my birthday, no matter how high the numbers go. You just walk the whole day with a kind of glow about you, passing strangers with a smile, half expecting them to know what day it is and to stop and offer their well wishes.

So even when the number is 73, my birthday will probably still be a big day for me. The day that’s all about me, unapologetically, all day long. This year, that day was last Friday, and I made the most of it, even dragging it out into the weekend. (I called it my birthday weekend.)

My friends didn’t disappoint. They lined up with long-distance phone calls, an extended lunch-hour shopping spree, completely unnecessary but totally appreciated gifts, and even an ear-splitting Christina Aguilera-like rendition of the birthday song, courtesy of my adorable sister.

Of course, the “birthday weekend” was made even better by the addition of a film festival, complete with a Best Female Filmmaker award that was appropriately shiny and now sits in my dining room awaiting a good polishing.

So here’s to all my friends and family, who put up with my annual birthday antics. And to Boy, who never fails to weather the event with good humor, and this year went so far as to bake me a homemade ginger cake that was quite possibly the best thing I’ve tasted all year long. Heart shapes to all of you.

Mood: Absolutely positive
Drinking: One for the road

-Lo, who appreciates the birthday song and all, but who are you supposed to be looking at when they sing it to you? And is it okay to sing along and say, “happy birthday, dear me-ee!”?