Mood: Numb | Drinking: I should be! 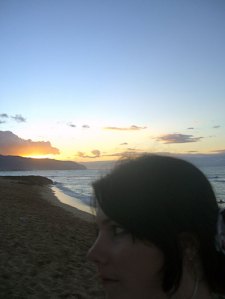 When I was little, I loved the book about the boy Alexander and his “terrible, horrible, very bad, no good day.” Something about the drama of that statement seemed hilarious to me at the time.

But I have had a terrible, horrible, very bad, no good week, and am not yet finding it hilarious.

The lead-in to this supersonically shitastic week began last month when my parents were visiting and we got a call from my aunt, who lives in Hawaii. She has had my grandmother living with her for the past year and a half. Three weeks ago, Nana was diagnosed with terminal lung cancer.

So on November 1st my mom, my sister, my nephew and I boarded a plane to Oahu. I’ve never been to Hawaii before. It’s a very strange experience, going to a vacation spot on such an anxious family errand. Everyone else was wearing bikinis and flaunting their newly acquired tans while the three Witmer women jostled about on various harried excursions, sweaty, disheveled, toting a tired baby and wearing decidedly un-tropical shoes.

Thus began what has quite possibly been the worst week of my life. The photo above was taken on Sunday, November 2, at sunset on the North Shore near Haliewa. It was possibly the last truly peaceful moment I will have in quite awhile.

On Monday, while I was at my aunt’s house, Nana suddenly complained of chest pain, then head pain, then her knees buckled as my aunt was helping her walk. I lunged across the room to help catch her as she fell, and my aunt and I lowered her to the floor where she lay, gasping for breath like a fish on the shore, eyes rolled up in her head.

My aunt and I were the only ones there at the time, so I called 911, then called my mother as I stood at the end of the driveway waiting for the ambulance. My mom and the paramedics arrived at the same time, and she and I drove behind the ambulance to the hospital in Wahiawa.

Nana was pronounced dead 20 minutes after our arrival.

That was Monday. On Tuesday, amid the shock of grief and initial frantic funeral planning, I anxiously watched election returns come in. I had cast my vote early at city hall once I knew I would be out of state on election day, but I missed the thrill of that early morning democratic ritual, wearing the sticker in to work and walking about the rest of the day feeling oh, so civic-minded.

I didn’t have access to a TV, so I was scanning several websites at once and instant messaging with Boy, trying to keep up as states were called blue or red.

Of course, I am overjoyed that Barack Obama is now our President-Elect, and I am filled with hope at what that means for the future of our battered country. But the thrill of victory was tempered by the passage, here in California, of Proposition 8, which takes away the right of gay couples to get married. Such a crushing blow for equal rights everywhere.

That was Tuesday. On Wednesday, my sister and I woke early and packed our bags because our return flight for the mainland was scheduled for that afternoon. First, though, we stopped by my aunt’s house to help deal with decisions that needed to be made: When were my aunt and my mom flying back to Illinois? When should we have the wake and the funeral? What relatives still needed to be called? Who were the pallbearers going to be? What photos of Nana did we have for a memorial? What clothes should she wear in the casket?

So many decisions, so many emotions, and no time. As my sister and I checked our bags at the airport in Honolulu, I realized I had left my credit card at the Mililani Kinko’s where we had been scanning in old family photos so Boy could use them to make a memorial DVD for the funeral service. I’ve never forgotten my credit card anywhere. What a time to do it!

Seven hours later, give or take, my sister, my nephew and I landed at SFO a bit bedraggled and worse for wear. I crashed into bed at about 2 a.m.

That was Wednesday. On Thursday, I woke up early and headed into work, my head full of all I needed to do to prepare for yet another trip. I needed to tell my boss that I would be taking bereavement time and traveling to the funeral. I needed to catch up on work I missed because of the trip to Hawaii.

Instead, I walked into work only to find out that I, my best friend, and about 1/3 of my company were being laid off. I was completely blindsided. I knew, of course, that the economy was awful, but I naively assumed that my job would be safe. I was wrong.

That was Thursday. Today I woke up and wondered what else was going to go wrong. At 11:30 a.m. I found out: a friend from high school called with news about her family and a crisis they are suddenly going through. Somehow I wasn’t surprised to finish off the week with a bang.

So now I am packing my suitcase so Boy and I can get on a plane in the morning and head back to Illinois. There will be a wake on Sunday, and a funeral on Monday – which also just happens to be my birthday.

It all seems so surreal. I’ve never called 911 for a medical emergency before. I’ve never before waited at the end of a driveway, knowing the sirens I could hear from a distance were coming for me. I’ve never before stood in an emergency room and watched a doctor come out to tell me that he’s sorry, but they did everything they could. I’m still having trouble believing it’s all real.

One of the executives at my company on Thursday, after I had gotten the news about my now non-existent job, asked me what I was feeling. I just started laughing and looked at her and said, “I have no idea what I’m feeling!”

That’s still true, to an extent. It’s been a helluva week, and it’s too much to wrap my head around all at once. I think that underneath it all, I’m ok, and I believe that I will be ok. But from here on out, I’m just taking one day at a time until I come out the other side.

So now I’m going to go be with my family, and remember Nana, and eat some Chicago pizza. The rest of it I’ll deal with when I come back.

Anyway, that was my week. How was yours?