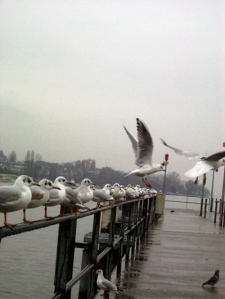 To be so close and stay
so silent, though all sorts of words
come tumbling out of your ears,
your eyes, your unmentionable orifices,
the out-always-possible-aware
frustration.

Eloquence used to hang so easy
on you. All your consonants
and vowels would line up
with spines perpendicular,
baring eager Vaseline grins like
so many beauty contestants. But
where are all those bleached queens now
add talk this…?

You open your mouth and
words scatter like birds
after buckshot leaving behind
such a small selection
of wing-draggers and stragglers
that you hesitantly send out
all roads way.

I know I know I know
this conjugation is not
what you intended. But
the better linguist remains
dumbstruck, lost somewhere
in an alien hemisphere,
our the wondering.

What will you say when
you come back to us if
you come back to us
full of new words?
You’ve never climbed so high
in all of your living, still shouldering
the implicit expectations of so many eyes
believing someday you will. You will
expand your creations horizons.

Uh. Did you just see what happened here?

As soon as I decided to write a poem a day for April to celebrate National Poetry Month, I knew I was off my nut. But I did it anyway, and not only did I not miss one single day, but on one occasion (April 24th), I got extra crazy and wrote two poems in one day… and posted them both!

Today’s poem is extra-special, not only because it is the last poem of the month, but because it was inspired by a dear friend of mine who suffered a catastrophic stroke a couple of months ago, and is still suffering from aphasia, meaning his language is very limited. He knows what he wants to say, but the words just won’t come out right.

I received an email from him earlier this week titled “Text Impossible!”, and it is directly responsible for today’s poem, which also incorporates several of the phrases he’s written or spoken recently in attempts to communicate. Even though he’s not yet saying what he wants to say, the words he is saying are strangely beautiful.

I thought it quite fitting to close a month of extremely prolific communication with a poem about being unable to communicate the way you want to.

So thank you to DZ for his beautiful bravery, and thanks to all of you who have been reading along these past 30 days. I’ve written so many things I never expected to write, and it’s all been really very wonderful.

Thanks for being here!